An introduction to INSIDE/OUTSIDE

As I write, the Orange Tree has been closed for a year. It’s time to switch the lights back on. Inside/Outside will be the first time we have told stories here since March 2020.

It feels important that we reopen with new plays – by writers who have been an important part of the Orange Tree’s story over the last few years, and to new writers who we are excited to introduce to audiences. I’ve been thinking back to how these playwrights came into our lives. Together, they tell a story about how the Orange Tree has made its name as a home for new plays. 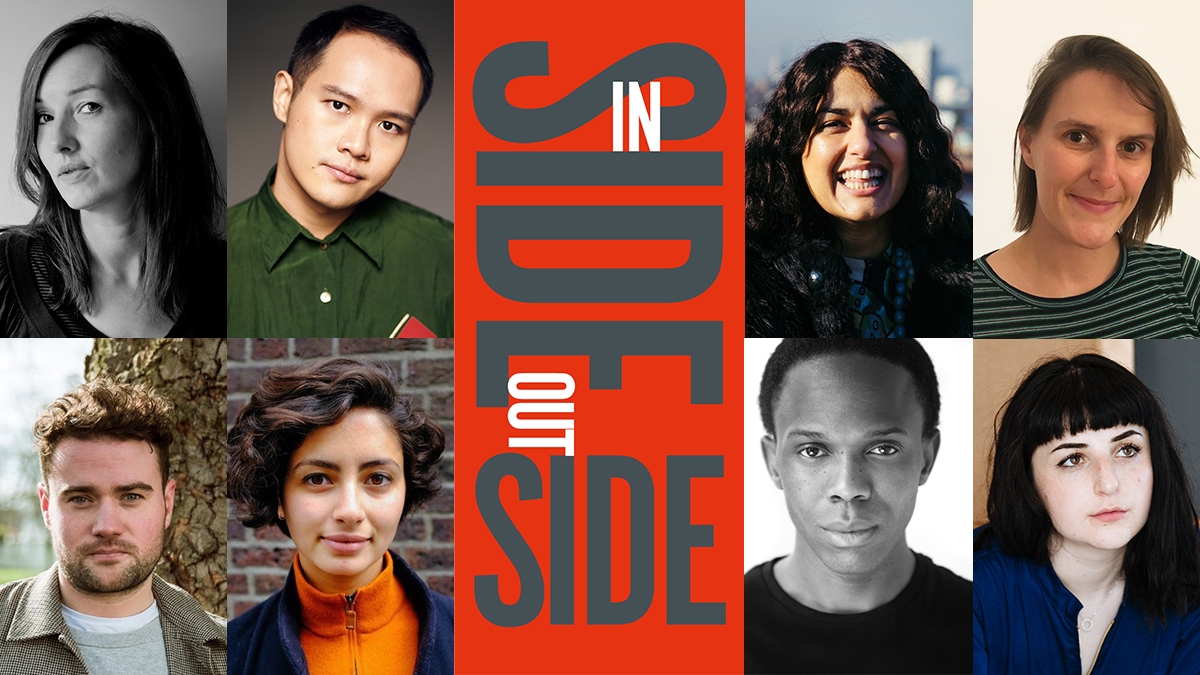 Deborah Bruce’s The Distance was the first new play in Paul Miller’s inaugural season at the Orange Tree in 2014. I remember Paul sending it to me with that sense of glee – finding an excellent new play can be like finding treasure. I read it in a Costa Coffee in Finchley, and marveled at how Deborah used the play to ask difficult questions about motherhood, with such humour. I replied to Paul immediately – we had to see if we could do it. We did, and it was an immediate success.

We met Zoe Cooper in the Attenborough room at the theatre, where so many of our ideas start out, drinking tea from ugly cups. The team had fallen in love with Jess and Joe Forever in one of our script meetings, and we couldn’t wait to talk about it. Her plays tell stories of queer people with warmth and inclusivity, with actors turning out to the audience and welcoming them into their worlds. In both Jess and Joe Forever and Out of Water she is concerned by the world we are passing on to the next generation. The impact of the virus on young people is immeasurable, and so I’m glad that in The Kiss, and in Sonali Bhattacharyya’s Two Billion Beats, we create the space to think about the world we want them to grow up in, and the role grown-ups might play in shaping that.

Both Sonali and Joe White are graduates of the OT’s Writers Collective programme. The Collective has been a key part of the theatre’s offer to the playwriting community: we meet in the rehearsal room amidst unwashed-up mugs from the day’s rehearsal and spark collaborations and conversations as we explore new ideas for the theatre.

Sonali went on to be the OT’s Writer on Attachment through Channel 4 Playwrights Scheme in 2018, and it was a treat to work with her during that year. As the world becomes a harder place to live, Sonali’s work combines political energy with optimism for the human spirit, and that is just what we need now.

After his time on the Collective, we produced Joe White’s play Mayfly, and the production remains a favourite amongst our audiences. The characters in Joe’s plays aren’t used to being given the microphone – lost souls in search of connection, often erased from the national story because of accidents of class or geography.

Kalungi Ssebandeke and Joel Tan are writers new to the OT. Kalungi came into our lives when he was cast in our production of Blood Knot in 2019. It was clear to everyone that here was a fantastic actor, and one day between a matinee and an evening show we sat down for a chat and he pushed a fascinating play about the boxer Bill Richmond across the table (or at least into my inbox).

I first heard about Joel when his epic and shapeshifting play Love in the Time of the Ancients was nominated for an award run by the tireless champions of new work Papatango Theatre Company. Joel had been putting down roots in the London playwriting scene having arrived here from Singapore. He came in for a meeting at the Orange Tree shortly before the world shut down, and optimistic conversations about what we might be able to do evaporated. So it feels right that with Kalungi and Joel we can pick up where we left off, championing the work of new talent.

The threshold between the inside and the outside has felt particularly impermeable over this last year, as we have been asked to stay in our homes. We have also been particularly attuned to the way the shifting weather outside our windows has affected our ability to ride this storm: “Now the sun is here, I am all-powerful”, said one of the directors to me during a script meeting a few weeks ago, with her face bathed in sunlight.

As we Zoomed one another during the winter lockdown at the end of 2020, ‘in’ and ‘out’ felt like an appropriate axis by which to examine the world we inhabit now, anticipating a time when our freedoms might return.

The Inside/Outside plays also remind us that we can’t take those freedoms for granted, and that the victims of this year are many.

Homelessness is on the rise,

the monster of racism lurks in everyday interactions, and is far from being weeded out,

the pandemic has put families and relationships under enormous strain

and many of the inequalities we live with are written into the systems in which we are asked to participate.

But the plays also offer hope. Two strangers learn that they can help one another move forwards in Joe White’s Ursa Major, and in Zoe Cooper’s The Kiss Lou is changed by the time she has lived through, but still committed to how she might pave the way for a new generation. Like Meg in Joel Tan’s play, we are looking forward to when the daffodils come, and we can once again tell one another stories, breathe the same air, embrace.