A Very Good War: Dan Rebellato on While the Sun Shines

Although more recently British theatre has paid particular attention to his more sombre plays, in the 1930s and 1940s, Terence Rattigan was mostly celebrated for his comedies. Just as French Without Tears delighted audiences in the 1930s, While the Sun Shines was one of the most effervescent theatrical experiences of the 1940s, comfortably outlasting the war that was its setting. While the Sun Shines is a farce, not a form that Rattigan worked in very often – despite the pleasure he took in meticulous play construction. 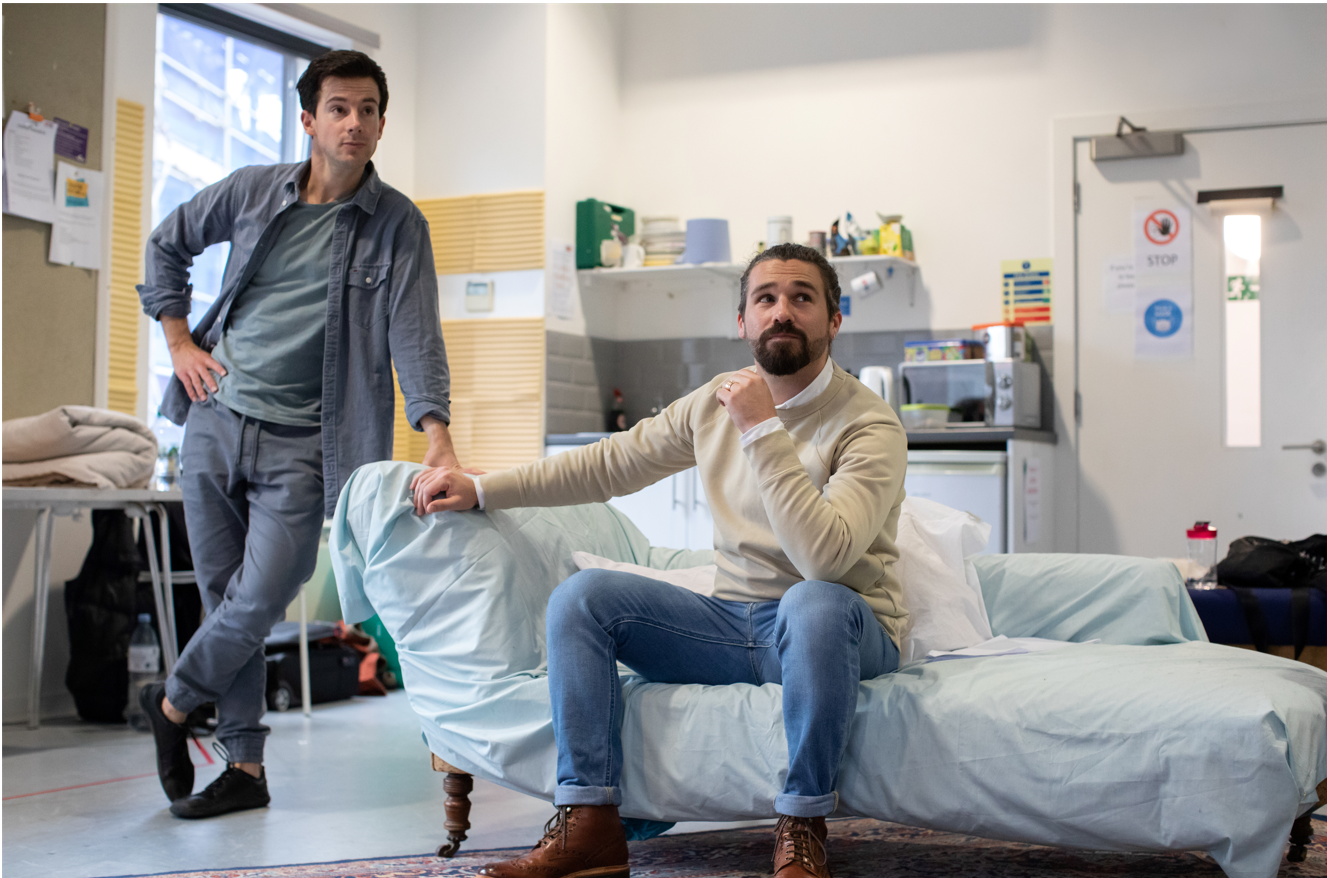 In the more ostensibly ‘serious’ plays, Rattigan’s elegant carpentry works to bring the characters to moments of deep crisis in a way that feels unforced and wholly persuasive. (Think of how Hester’s suicide note in The Deep Blue Sea moves effortlessly and logically from a mantelpiece to a neighbour’s hands to a dressing gown pocket and then, disastrously, into her lover’s possession.)

In the comedies, and perhaps in While the Sun Shines above all, the immaculate construction works to generate a sense of meringue lightness. There is a giddy brilliance to the way Rattigan moves his characters on and off stage, in and out of rooms, populating the world around the action – the kitchen, the bedroom, the park – with accelerating speed. Joyfully working through all the various romantic and sexual permutations in turn.

Watching the Orange Tree revival two and a half years ago (in those heady days when seeing a play about British citizens forced to stay indoors for fear of some lethal external menace felt merely nostalgic), I was struck, as I am always struck, about what an assured writer for the stage Rattigan is. By that I mean not just that he writes good plays but that his unfailing eye for the stage means that there are lines that seem unexceptional in print but because of his playcraft have volcanically powerful effects in performance. I think of Hester Collyer’s ‘I haven’t finished them’ in The Deep Blue Sea or Sibyl’s 'No, Mummy. I’m going to stay in the dining-room, and finish my dinner’ in Separate Tables. These lines will never make their way into books of quotations, but I’ve seen the first make an audience cry and the second make it stand up and applaud. And these apparently unpromising lines can also produce comic eruptions; one in particular, in the performance I watched, produced an explosive and then sustained shout of laughter, followed by those delicious aftershocks as audience members remembered the moment and laughed again. And what was this great witticism? What was this linguistic masterpiece of comic construction? The line is... ‘Oh it’s you, Mabs’.  Nothing on the page, everything in performance.

But we shouldn’t be fooled. This is a light comedy with a subversive heart. In his famous essay, ‘The Psychology of Farce’, the veteran US theatre critic Eric Bentley describes farce as a magnificent outrage, the playing out of violent fantasies ‘to damage the family, to desecrate the household gods’ and, by extension, represents the manifestation of a repressed collective wish to bring society down around us.

While the Sun Shines’ lightness is the intoxicating freedom of a world where conventionalities of love and sex are being shaken free. The dizzying speed of the play, its building to moments of sheer hysteria - the telephone sequence, for example – leaves moral conformity standing, in a celebration of what Freud would call polymorphous perversity. As Joe Orton – a playwright that Rattigan admired and supported - once said of audiences and their reaction to sex, ‘Much more fucking and they’ll be screaming hysterics in next to no time’.

Because, trying to avoid spoilers, this is a play that begins with an imputation of sexual promiscuity that turns quickly into an imputation of homosexual promiscuity before diving off elsewhere. It has a sexually active woman and another with polyamorous desires. It has three men sharing a bed. It has some of the campest dialogue in twentieth century theatre (an Earl tells a American lieutenant ‘You’d better get dressed, unless you want to receive Mabel Crum in your negligée’) and, quarter of a century before Orton’s supreme farce What the Butler Saw, it plays dizzyingly with the absurdities of conventional gender roles: ‘What is your definition of a man?’ asks one character and receives the gnomic reply, ‘Someone who does something at a moment like this’. The women are passed like chattels among the men, but then the men are passed like chattels between the women. It is a play in which the concept of adultery seems systematically dismantled and it is gleefully unsentimental in its intertwining of love, sex and money.

This starts to make While the Sun Shines sound ponderously serious, which it isn’t: or at least, its seriousness lies in its refusal of all seriousness. It plays out against the conduct of war and the threat of bombing but refuses to take these seriously (the anti-aircraft searchlights, we are told, make an elegant background to a nocturnal courtship). The aristocrats among the dramatis personae acknowledge unfretfully their imminent class extinction. The alliance of Britain, France and the US is played out as a camply homosocial bit of male bonding. All seems to be fair game in love and war.

There was an immediate context for all this promiscuity. The upheaval of normal rules, the constant life-threatening peril of the air raids, the intermingling of civilian and military, the transient urban population, and, of course, the night-time blackouts created ideal conditions for a fatalistic festival of covert liaisons. This was not just the cliché of wives finding comfort with a neighbour while their husbands were away; it was much more perverse than that. ‘If there is a heaven for homosexuals,’ Quentin Crisp once wrote, ‘it will be very poorly lit and full of people they can feel pretty confident they will never have to meet again’.

Rattigan certainly availed himself of some of these freedoms and this play, set, after all, in his own apartment in Albany, surely reflects something of the fact that, in carnal terms, Terry had a very very good war. While the Sun Shines is a glimpse of how lightness could be found in the dark, how love could be found amidst the ruins. It’s a play with pleasure at its very heart.

Dan Rebellato is a playwright and Professor of Contemporary Theatre at Royal Holloway, University of London. He is also the editor of Terence Rattigan’s plays for Nick Hern Books.